Carbon sequestration refers to the capture, removal, and storage of carbon dioxide (CO2) from the atmosphere. It is a key process in stabilizing carbon in solid and dissolved forms that doesn't contribute to atmospheric warming and climate change. There are biological and geological mechanisms of carbon sequestration with oceans absorbing approximately 25% of anthropogenically produced CO2 annually.

One form of carbon sequestration in marine environments results from copepods undertaking a vertical, seasonal migration to the deep ocean where they overwinter for several months every year. These copepods rely on carbon-rich lipid reserves to sustain them as they enter a form of dormancy after the descent, converting the lipid-based carbon to CO2 as a byproduct of respiration. This CO2 stays at depth after individual copepods return to the surface the following spring and is thus sequestered from atmospheric release. This type of carbon sequestration is referred to as a lipid pump. 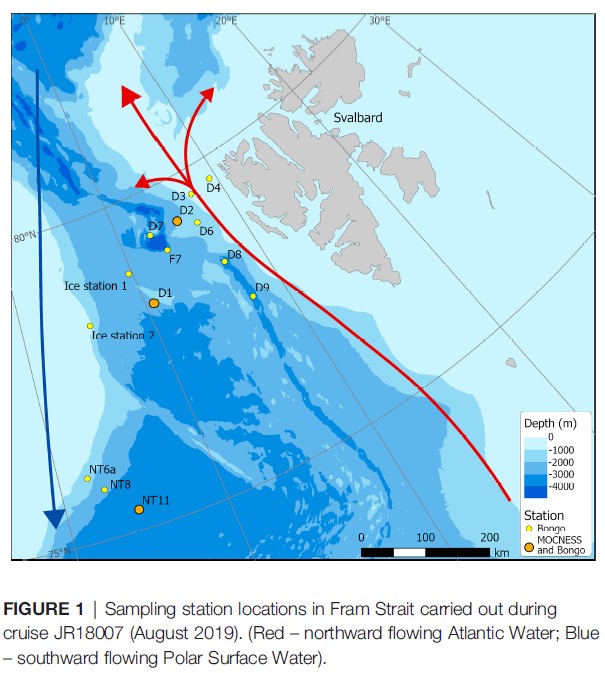 This study is the first attempt to estimate the size of the lipid pump in the Fram Strait region between Greenland and Iceland, an important oceanographic gateway where Arctic and Atlantic waters interact (Figure 1). Specifically, it focuses on how climate change-induced shifts to the distributional range of the copepod species Calanus finmarchicus impact the estimated magnitude of the lipid pump in the region.

As part of this effort, FlowCam Macro was used to analyze samples collected from Bongo nets deployed at 14 stations spread throughout the Fram Strait region. The instrument captured images of individual copepods which were then classified into taxonomic groups using VisualSpreadsheet software, allowing researchers to quantify the number of Calanus individuals within all Bongo net samples and estimate the total abundance of taxa across sampling stations. According to the researchers, FlowCam Macro provided reliable estimates of population sizes of late-stage C. finmarchicus in the surface layers of all sampled locations.

FlowCam data, combined with molecular analysis, allowed researchers to evaluate the species distribution of C. finmarchicus as it expands northward from its Boreal range into the Arctic Fram Strait region. They found abundance to be spatially variable across the region, with core distributional areas found mainly in the eastern region where many C. finmarchicus individuals can overwinter at depth. As such, lipid pump magnitude was approximately six times greater in the Eastern Fram Strait than in the Western Fram Strait. Across the entire Fram Strait region, the lipid pump generated by this species is 0.3 metric tons of carbon per year, a value projected to increase as C. finmarchicus continues its northward expansion.

This study contributes to a growing awareness of the dynamic responses of critical basal marine species to changing environmental conditions likely resulting from climate change. The rapidity with which planktonic species such as Calanus can respond to change may have important impacts on broader ecosystem function.

Carbon and Lipid Contents of the Copepod Calanus finmarchicus Entering Diapause in the Fram Strait and Their Contribution to the Boreal and Arctic Lipid Pump – Tarling, et al, Frontiers in Marine Science June 2022, https://doi.org/10.3389/fmars.2022.926462

Nicole Stephens is the Customer Service Manager at Yokogawa Fluid Imaging Technologies and has a background in marine science and fisheries biology. Her extensive technical knowledge and experience analyzing a wide variety of sample types allows her to assist customers in method development and FlowCam lab integration.

Protein Therapeutics
2 min read
Japanese Consortium Assesses the Standardization of Flow Imaging Microscopy for Therapeutic Protein Regulations
In a recent study by Kiyoshi et al., a Japanese consortium conducted a collaborative study to assess the standardization of flow imaging microscopy …
Read Post
Plankton Research
2 min read
Using the FlowCam to Study Harmful Algae Blooms Around Sanibel Island, Florida
It's hard to imagine a more picturesque location from which to perform one's research than Sanibel Island, Florida. However, as can be seen in the …
Read Post

Find supplies and spare parts for your FlowCam instrument or ask for a quote.

Check out our collection of downloadable resources including white papers, application notes, technical notes, and videos.